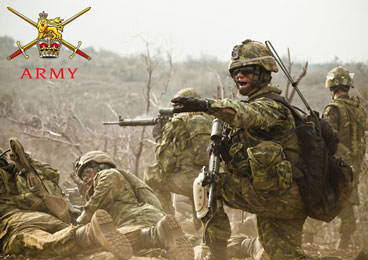 British Army Soldiers | British Army | British: The modern British Army traces back to 1707, with an antecedent in the English Army that was created during the Restoration in 1660. The term British Army was adopted in 1707 after the Acts of Union between England and Scotland. Although all members of the British Army are expected to swear (or affirm) allegiance to Elizabeth II as their commander-in-chief, the Bill of Rights of 1689 requires parliamentary consent for the Crown to maintain a peacetime standing army. Therefore, Parliament approves the army by passing an Armed Forces Act at least once every five years. The army is administered by the Ministry of Defense and commanded by the Chief of the General Staff.

Great Britain has been challenged by other powers, primarily the German Empire and the Third Reich during the 20th century. A century earlier it vied with Napoleonic France for global pre-eminence, and Hannoverian Britain’s natural allies were the kingdoms and principalities of northern Germany. By the middle of the 19th century, Britain and France were allies in preventing Russia’s appropriation of the Ottoman Empire (although the fear of French invasion led shortly afterwards to the creation of the Volunteer Force. By the first decade of the 20th century, the United Kingdom was allied with France (by the Entente Cordiale) and Russia (which had a secret agreement with France for mutual support in a war against the Prussian-led German Empire and the Austro-Hungarian Empire).

When the First World War broke out in August 1914 the British Army sent the British Expeditionary Force (BEF), consisting mainly of regular army troops, to France and Belgium. The fighting bogged down into static trench warfare for the remainder of the war. In 1915 the army created the Mediterranean Expeditionary Force to invade the Ottoman Empire via Gallipoli, an unsuccessful attempt to capture Constantinople and secure a sea route to Russia. World War I was the most devastating in British military history, with nearly 800,000 men killed and over two million wounded. Early in the war, the BEF was virtually destroyed and was replaced first by volunteers and then a conscript force. Major battles included those at the Somme and Passchendaele. Advances in technology saw the advent of the tank (and the creation of the Royal Tank Regiment) and advances in aircraft design (including the creation of the Royal Flying Corps) which would be decisive in future battles. Trench warfare dominated Western Front strategy for most of the war, and the use of chemical weapons (disabling and poison gases) added to the devastation. The Second World War broke out in September 1939 with the Russian and German Army’s invasion of Poland. British assurances to the Poles led the British Empire to declare war on Germany. As in the First World War, a relatively-small BEF was sent to France and hastily evacuated from Dunkirk as the German forces swept through the Low Countries and across France in May 1940. After the US entered the war and the British Army recovered from its earlier defeats, it defeated the Germans and Italians at the Second Battle of El Alamein in North Africa in 1942–1943 and helped drive them from Africa. It then fought through Italy and, with the help of American, Canadian, Australian, New Zealand, Indian and Free French forces, took part in the D-Day invasion of Normandy on 6 June 1944; nearly half the Allied soldiers were British. In the Far East, the British Army rallied against the Japanese in the Burma Campaign and regained the British Far Eastern colonial possessions.