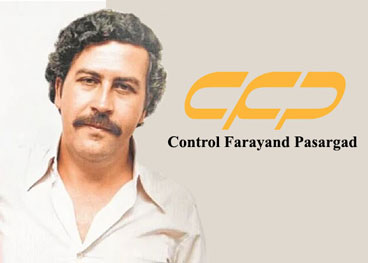 Pablo Escobar biography: Pablo Escobar was born in Rionegro (December 1st, 1949) and raised in Medellín, Escobar studied briefly at Universidad Autónoma Latinoamericana of Medellín, but left without graduating; he instead began engaging in criminal activity, selling illegal cigarettes and fake lottery tickets, as well as participating in motor vehicle theft. In the early 1970s, he began to work for various drug smugglers, often kidnapping and holding people for ransom.

In 1976, Escobar founded the Medellín Cartel, which distributed powder cocaine, and established the first smuggling routes into the United States. Escobar’s infiltration into the U.S. created exponential demand for cocaine and by the 1980s it was estimated Escobar led monthly shipments of 70 to 80 tons of cocaine into the country from Colombia. As a result, he quickly became one of the richest people in the world, but consistently battled rival cartels domestically and abroad, leading to massacres and the murders of police officers, judges, locals, and prominent politicians, making Colombia the murder capital of the world.

In the 1982 Colombian parliamentary election Escobar was elected as an alternate member of the Chamber of Representatives as part of the Liberal Alternative movement. Through this, he was responsible for community projects such as the construction of houses and football fields, which gained him popularity among the locals of the towns that he frequented. However, Escobar was vilified by the Colombian and U.S. governments, who routinely stifled his political ambitions and pushed for his arrest, with Escobar widely believed to have orchestrated the DAS Building and Avianca Flight 203 bombings in retaliation.

In 1991, Escobar surrendered to authorities, and was sentenced to five years’ imprisonment on a host of charges, but struck a deal of no extradition with Colombian President Cesar Gaviria, with the ability of being housed in his own, self-built prison, La Catedral. In 1992, Escobar escaped and went into hiding when authorities attempted to move him to a more standard holding facility, leading to a nation-wide manhunt. As a result, the Medellín Cartel crumbled, and in 1993, Escobar was killed in his hometown by Colombian National Police, a day after his 44th birthday.

Escobar’s legacy remains controversial; while many denounce the heinous nature of his crimes, he was seen as a “Robin Hood-like” figure for many in Colombia, as he provided many amenities to the poor. His killing was mourned and his funeral attended by over 25,000 people. Additionally, his private estate, Hacienda Nápoles, has been transformed into a theme park, and he has been both praised and criticized for importing hippopotamuses to Colombia. His life has also served as inspiration for or has been dramatized widely in film, television, and in music.

In The Accountant’s Story, Roberto Escobar discusses how Pablo rose from middle-class simplicity and obscurity to one of the world’s wealthiest men. Beginning in 1975, Pablo started developing his cocaine operation, flying out planes several times, mainly between Colombia and Panama, along smuggling routes into the United States. When he later bought fifteen bigger airplanes, including a Learjet and six helicopters, a close friend of Pablo’s died during the landing of an airplane along with the plane being destroyed, according to his son. Pablo reconstructed the airplane from the scrap parts that were left and later hung it above the gate to his ranch at Hacienda Nápoles.

In May 1976, Escobar and several of his men were arrested and found in possession of 18 kilograms (39 lb) of white paste, attempting to return to Medellín with a heavy load from Ecuador. Initially, Pablo tried to bribe the Medellín judges who were forming a case against him and was unsuccessful. After many months of legal wrangling, he ordered the murder of the two arresting officers, and the case was later dropped. Roberto Escobar details this as the point where Pablo began his pattern of dealing with the authorities through either bribery or murder.

Roberto Escobar maintains Pablo fell into the drug business simply because other types of contraband became too dangerous to traffic. As there were no drug cartels then and only a few drug barons, Pablo saw it as untapped territory he wished to make his own. In Peru, Pablo would buy the cocaine paste, which would then be refined in a laboratory in a two-story house in Medellín. On his first trip, Pablo bought a paltry 14 kilograms (30 lb) of paste in what was noted as the first step towards building his empire. At first he smuggled the cocaine in old plane tires, and a pilot could return as much as US$500,000 worth per flight, depending on the quantity smuggled.

Sixteen months after his escape from La Catedral, Pablo Escobar died in a shootout on 2 December 1993, amid another of his attempts to elude the Search Bloc. A Colombian electronic surveillance team, led by Brigadier Hugo Martínez, used radio trilateration technology to track his cell phone transmissions and found him hiding in Los Olivos, a middle-class barrio in Medellín. The search bloc of 8 men raided the House by blowing the door open and pursuing him as he ran to the roof and tried to escape them, as well as engaging in a firefight with Escobar and his bodyguard, Álvaro de Jesús Agudelo (alias “El Limón”) which ensued. The two fugitives attempted to escape by running across the roofs of adjoining houses to reach a back street, but both were shot and killed by Colombian National Police. Escobar suffered gunshots to the leg and torso, and a fatal gunshot through the ear.

It has never been proven who actually fired the final shot into his ear, nor has it been determined whether this shot was made during the gunfight or as part of a possible execution, with wide speculation remaining regarding the subject. Some of Escobar’s relatives believe that he committed suicide. His two brothers, Roberto Escobar and Fernando Sánchez Arellano, believe that he shot himself through the ear. In a statement regarding the topic, the duo stated that Pablo “had committed suicide, he did not get killed. During all the years they went after him, he would say to me every day that if he was really cornered without a way out, he would ‘shoot himself through the ear’.”

oh, pablo escobar was the king of cocaine in the world