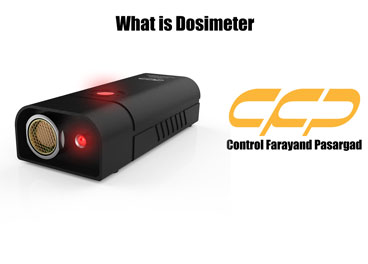 What is Dosimeter: Dosimeter is a device that measures dose uptake of external ionizing radiation. It is worn by the person being monitored when used as a personal dosimeter, and is a record of the radiation dose received. Modern electronic personal dosimeters can give a continuous readout of cumulative dose and current dose rate, and can warn the wearer with an audible alarm when a specified dose rate or a cumulative dose is exceeded. Other dosimeters, such as thermoluminescent or film types, require processing after use to reveal the cumulative dose received, and cannot give a current indication of dose while being worn.

Ionising radiation damage to the human body is cumulative, and is related to the total dose received, for which the SI unit is the sievert. Workers exposed to radiation, such as radiographers, nuclear power plant workers, doctors using radiotherapy, those in laboratories using radionuclides, and HAZMAT teams are required to wear dosimeters so a record of occupational exposure can be made. Such devices are known as “legal dosimeters” if they have been approved for use in recording personnel dose for regulatory purposes.

Dosimeters are typically worn on the outside of clothing, a “whole body” dosimeter is worn on the chest or torso to represent dose to the whole body. This location monitors exposure of most vital organs and represents the bulk of body mass. Additional dosimeters can be worn to assess dose to extremities or in radiation fields that vary considerably depending on orientation of the body to the source.

the best dosimeter products in this site.