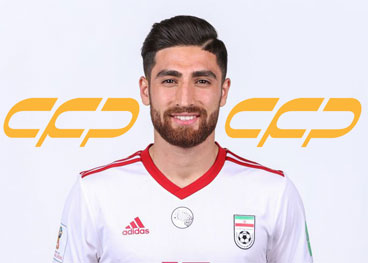 Jahanbakhsh played most of his youth in Rasht and Persian Qazvin before joining the youth academy of Damash Gilan in 2008. Jahanbaksh started his career in 2010 with Damash Tehran, an affiliate of Damash Gilan in the 2nd Division. In 2011, Alireza returned to Gilan and at the age of 17. In 2011, Jahanbakhsh played his first game for Damash Gilan in the Iran Pro League against Mes as one of Damash’s youngest ever players. Alireza scored his first goal on 15 January 2012 in a 1–0 victory against Fajr. In 42 league appearances with Damash, he scored 10 goals.

On 26 May 2013, Jahanbakhsh reached a verbal agreement with Dutch Eredivisie outfit NEC for a three-year deal. This deal was subject to a medical examination and obtaining a visa and work permit. He officially joined the club on 1 July 2013. He made his debut as a substitute in a league match against Groningen on 3 August 2013. He scored his first goal in an 8–0 win over Harkemase Boys in the KNVB Cup. On 1 December 2013, Jahanbakhsh scored two goals and assisted the other in a 3–2 league match win over AZ Alkmaar. On 22 December, he scored and assisted at FC Groningen while providing a secondary assist on 15 February 2014 against RKC Waalwijk. On 22 March, when NEC were down 2–0 at halftime, Jahanbakhsh came on as a substitute after the half and provided an assist to Michael Higdon in their 2–2 draw at Heerenveen. On the final day of the 2013–14 season, Jahanbakhsh scored two late goals against Ajax to save NEC from automatic relegation, instead securing a relegation playoff spot. Alireza was originally voted the Eredivisie’s greatest talent of the season before becoming runner-up to Memphis Depay.

On the opening day of the 2014–15 Jupiler League, Jahanbakhsh scored a goal in a 3–1 win against FC Eindhoven. On 29 August, he scored two goals and provided two assists in a 4–1 win at Helmond Sport. On 20 September, he scored against FC Emmen to help bring NEC to the top of the league table. Three days later, on 23 September, AJ scored a free kick in extra time and converted a penalty in their win against Ajax II at Amsterdam during the second round of the 2014–15 Dutch Cup. On 3 October, he scored a goal and provided an assist in a 2–1 win against Almere City to send NEC to the Eredivisie play-offs as quarter-season league champions. On 17 October 2014, Jahanbakhsh was named the Best Player of the First Period of the 2014–15 Jupiler League. On 28 November, he opened the scoring with a volley and provided two assists in a 5–1 win over Jong Twente. On 1 February 2015, in his first game upon his return from the 2015 AFC Asian Cup, he scored a bicycle kick and was named man of the match in the 3–1 win over Helmond Sport. On 13 February, he scored a goal and provided two assists in a 3–2 win over FC Emmen with another goal against Achilles ’29 days later to bring his tally to 4 goals in 5 consecutive matches after the Asian Cup. At the end of the season, Jahanbakhsh was selected by fans as NEC’s player of the season. On 12 May 2015 Jahanbakhsh was voted as the Eerste Divisie’s best player for the 2014–15 season, with twelve goals and eighteen assists in the league.

On 3 August 2015, Jahanbakhsh signed a five–year contract with Dutch club AZ Alkmaar. He was given number nine as his jersey number, and made his Eredivisie debut for AZ on 12 September 2015 in a 3–1 win over De Graafschap. Jahanbakhsh made his UEFA Europa League debut in a 2–1 group stage win over Athletic Bilbao on 1 October 2015. Alireza recorded his first assist for AZ on 21 November 2015 in a 3–1 victory against Heerenveen. Jahanbakhsh scored his first goal for AZ on 30 January 2016 in a match against his former club NEC. He scored his second goal of the season and also recorded his fourth assist on 13 February 2016 in a 6–3 victory over Heracles Almelo.

In June 2016 Jahanbakhsh switched from number 9 to number 7 for the upcoming 2016–17 season. On 2 July 2016, in AZ’s first preseason match, Jahanbakhsh recorded a goal and an assist in his teams 5–1 victory. On 28 August he scored his first goal of the season against FC Utrecht. The match was ended 2-1 which Jahanbakhsh scored the winning goal. On 13 January 2017, Jahanbakhsh scored a brace and recorded an assist, as well as being named man of the match in a 3–1 victory against Go Ahead Eagles. On 21 August 2016, he scored his first goal of the season in a 2–1 win over Utrecht. On 16 February 2017, he scored his first ever European goal in a 4–1 loss to Lyon in Round of 32 of the Europa League. Jahanbakhsh was named the best winger of the 2016–17 season in the Dutch League.

Alireza scored a hat trick and recorded an assist on 18 April 2018 against Vitesse in the 2017–18 Eredivisie. Jahanbakhsh scored another hat trick on the last match day to become the leading goal scorer of the Eredivisie season with 21 goals, and also finished joint third with 12 assists. He became the first Asian player ever to become the top goalscorer in a top level European league.

On 25 July 2018, Jahanbakhsh transferred to Premier League side Brighton & Hove Albion for an undisclosed club record fee, signing a five-year contract. He announced on his Instagram that he will wear number 16, the same number he used to wear in his first season at NEC. On 11 August 2018, Jahanbakhsh made his debut for Brighton as a substitute in the club’s opening match of the Premier League season against Watford. Even though he played 25 matches in the season due to injuries and poor performance he amounted no goals and no assists.

With the managerial change at Brighton with Graham Potter replacing Chris Hughton, Jahanbakhsh rarely found himself in the match squad until 8 December 2019 when he came in as a substitute in a match against Wolverhampton. On 28 December 2019, he scored his first goal for the club on his first start against Bournemouth. Alireza was overcome with emotion and was seen crying after scoring his first ever goal for his club. On January 1, 2020 he scored an equalising bicycle kick goal for Brighton vs Chelsea.