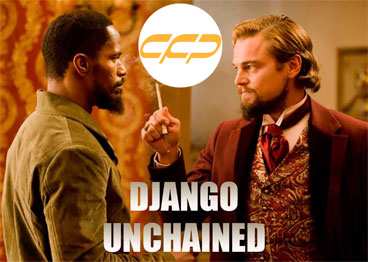 Django Unchained 2012 | Django Unchained: Django Unchained 2012, Django Unchained is a movie directed by Quentin Tarantino. In early 1858 Texas, brothers Ace and Dicky Speck drive a group of shackled black slaves on foot. Among them is Django, sold off and separated from his wife Broomhilda von Shaft, a house slave who speaks  German and English. They are stopped by Dr. King Schultz, a German dentist-turned-bounty hunter seeking to buy Django for his knowledge of the three outlaw Brittle brothers(John “Big John” Brittle, Roger “Lil Raj” Brittle, and Ellis Brittle), overseers at the plantation of Django’s previous owner and for whom Schultz has a warrant. When Ace levels his gun at him, Schultz kills him and wounds Dicky. Schultz insists on paying a fair price for Django before leaving Dicky to the newly freed slaves, who kill him and follow the North Star to freedom. Schultz offers Django his freedom and $75 in exchange for help tracking down the Brittles.