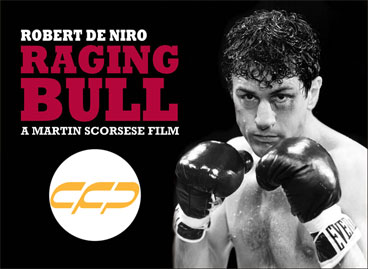 Raging Bull 1980 | Raging Bull: Raging Bull 1980, Raging Bull is a movie directed by Martin Scorsese. In 1964, an aging, overweight Italian American, Jake LaMotta, practices a comedy routine. In 1941, LaMotta is in a major boxing match against Jimmy Reeves, where he suffered his first loss. Jake’s brother, Joey LaMotta, discusses a potential shot for the middleweight title with one of his Mafia connections, Salvy Batts. Some time thereafter, Jake spots a fifteen-year-old girl named Vickie at an open-air swimming pool in his Bronx neighborhood. He eventually pursues a relationship with her, even though he is already married. In 1943, Jake defeats Sugar Ray Robinson, and has a rematch three weeks later. Despite the fact that Jake dominates Robinson during the bout, the judges surprisingly rule in favor of Robinson and Joey feels Robinson won only because he was enlisting into the Army the following week. By 1945, Jake marries Vickie.