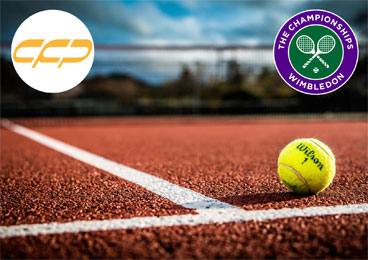 The tournament traditionally took place over two weeks in late June and early July, starting on the last Monday in June and culminating with the Ladies’ and Gentlemen’s Singles Finals, scheduled for the Saturday and Sunday at the end of the second week. However, recent changes to the tennis calendar have seen the event moved back by a week to begin in early July. Five major events are held each year, with additional junior and invitational competitions also taking place. Wimbledon traditions include a strict all-white dress code for competitors and royal patronage. Strawberries and cream are traditionally consumed at the tournament. In 2017, fans consumed 34,000 kg (33 tons) of English strawberries and 10,000 litres (2,200 gallons) of cream. Pimm’s is a favoured and traditional refreshment. The tournament is also notable for the absence of sponsor advertising around the courts, with the exception of Rolex, which provides timekeeping technology during matches. In 2009, Wimbledon’s Centre Court was fitted with a  retractable roof to lessen the loss of playing time due to rain. A roof was operational over No1 Court from 2019, when a number of other improvements were made, including adding cushioned seating and a table.

It all began with an announcement in the leisure magazine The Field on 9 June 1877 that “The All England Croquet and Lawn Tennis Club, Wimbledon, propose to hold a lawn tennis meeting, open to all amateurs, on Monday July 9th and following days”. A total of 22 men – no women were permitted at that stage – stumped up the £1 1 shilling entrance fee, being warned to bring their own rackets and “shoes without heels” but that balls would be provided by the club gardener. The All England Club had been founded solely for the purpose of croquet in 1869 on four acres of rented meadowland at Worple Road, Wimbledon but croquet was rapidly overtaken by the new pastime of tennis. Conditions were primitive. A temporary three-plank stand offered seats for 30 people, the total attendance for the final was 200, the rackets resembled snowshoes in shape and weight and the balls had hand-sewn flannel outer casings.

The fact tennis could be played with skill and enjoyment by both sexes led inevitably to the inclusion of women at Wimbledon, though the All England Club had several times politely turned down requests to include a ladies’ singles event before eventually capitulating in 1884. However, the ladies’ own championships would not be allowed to commence until the men’s singles had been completed. Another “second-class” note was that their entrance fee of 10 shillings and sixpence was exactly half that charged to the men. The first prize, a silver flower basket “value 20 guineas”, attracted an entry of 13 including the sisters Maud and Lilian Watson, the daughters of a Warwickshire vicar, and it was the sisters who contested the final, the 19-year-old Maud Watson winning in three sets. Wimbledon’s first-ever women’s champion showed her victory was no fluke by winning again in 1885.

The Doherty brothers, Reggie and Laurie, captured nine of 10 Wimbledon singles titles between them from 1897 to 1906, becoming the first great international stars of tennis, albeit without the attendant blast of publicity and the inflow of wealth. Because he was the taller of the two at 6’1”, Reggie was known as “Big Do” and at 5’9”, Laurie was “Little Do”. It was Big Do, poor health notwithstanding, who made the first Wimbledon impact, winning the men’s singles in four successive years from 1897-1900. The most memorable of these wins came in the 1898 final against Laurie, 6-1 in the fifth set, an epic tie despite the fact that they disliked having to play each other, much as the Williams sisters do nowadays. In 1902 Laurie reimposed the Doherty hegemony with the first of his five straight singles wins, and so brilliant were the brothers in nine Wimbledon years from 1897 to 1905 that they won the doubles crown on eight occasions. Their dominance in both singles and doubles also ensured Britain won the Davis Cup four years in a row from 1903 to 1906.

By the turn of the century Wimbledon had assumed an international character and in 1905 May Sutton of the United States became the first Champion from overseas when she won the Ladies’ Singles. She repeated her success in 1907, the year when Norman Brookes of Australia became the first Gentlemen’s Singles champion from overseas. Since that year, only two players from Great Britain, Arthur Gore and Fred Perry, have managed to win the Men’s Singles while there have been five British Ladies’ Champions since Wimbledon moved to Church Road — Kitty McKane Godfree, Dorothy Round, Angela Mortimer, Ann Jones and Virginia Wade.
The successful London Olympic bid for the 2012 Games meant that in 2012 the Olympic tennis tournament was held at Wimbledon. London has hosted the Olympics twice before in 1908 and 1948, with tennis being played at Wimbledon at the ’08 games. Tennis made its return as a full Olympic sport at the Seoul Games of 1988. Unlike modern Olympiads, the 1908 Games were held over six months with two tennis events (indoor and outdoor) split either side of Wimbledon.
The ’08 outdoor event – at the old Worple Road ground – attracted entrants from more nations than there had been contesting The Championships the few weeks before. Britain’s Josiah Ritchie won the gold medal that year after defeating Germany’s Otto Froitzheim in the final, 7-5, 6-3, 6-4, while the ladies’ event was rather unsuccessful amid so many withdrawals. Britain’s Dorothea Lambert Chambers was at her best in beating countrywoman Dora Boothby 6-1, 7-5 to claim the gold.

1913: Five Championships – Wimbledon completes a full set of events in 1913 as Championship status is accorded to the ladies’ doubles and mixed doubles.

1915-18: Championships suspended due to world war – The outbreak of war forced the loss of four years’ Championships, 1915-1918. Donations from members and well-wishers enabled the club to survive.

1915: Death of a Champion – Anthony (usually called Tony) Wilding, played first-class cricket, rugby union for Trinity College, Cambridge, and competed in motor cycling events, but his finest achievements were in lawn tennis. The New Zealander won four successive titles 1910-1913 and lost in the 1914 final. He also won three world singles championships and four Davis Cups with Australasia, the first against the British isles at Wimbledon. On the outbreak of War he was in the US preparing to play in the US Championships but returned to England and joined the Royal Marines. He was killed on the Western Front in 1915.

Major developments for the Championships in 1922 with the move from Worple Road to Church Road and the abolition of the Challenge Round. On court the French dominated with the ‘four musketeers’ winning the majority of men’s titles and Suzanne Lenglen thrice recording a clean sweep of ladies, ladies’ doubles and mixed doubles Championships. However, in 1925 an unfortunate mix-up which meant she kept royalty waiting led to her never playing at Wimbledon again. Her male compatriots continued with Henri Cochet’s 1927 final victory against Jean Borotra one for the ages. Rene Lacoste and Jacques Brugnon made up the quartet. In 1926 the future King played in the gentlemen’s doubles.